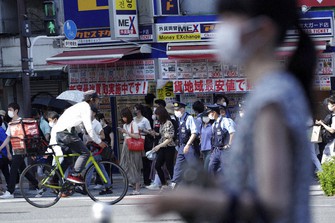 People and police officers wearing face masks to help curb the spread of the coronavirus walk past a busy crossing in Tokyo's Shinjuku district on July 23, 2021, hours before the opening ceremony for the Summer Olympics started. (AP Photo/Kantaro Komiya)

TOKYO (Kyodo) -- Japan's unemployment rate fell to 2.9 percent in June, reflecting a pickup in hiring at restaurants and retailers hit hard by the coronavirus pandemic as the state of emergency was lifted in some areas, government data showed Friday.

The seasonally adjusted jobless rate dropped from 3.0 percent for May, improving for the first time since March, the Ministry of Internal Affairs and Communications said.

The job availability ratio improved to 1.13 from 1.09 a month earlier, the Ministry of Health, Labor and Welfare said. The latest figure of 1.13 means that there were 113 openings for every 100 job seekers.

Japan lifted its third state of emergency, which asks alcohol-serving establishments to suspend their operations, other eateries to close early and people to refrain from unnecessary outings, in nine prefectures including Tokyo in late June, and only the southern island prefecture of Okinawa remained under the measure.

But the capital was put under a state of emergency again in mid-July amid a resurgence of infections and four other prefectures are now expected to be added to the measure, clouding the outlook for the employment environment.

Looking at figures unadjusted for seasonal factors in the reporting month, the total number of unemployed people increased 110,000 from a year earlier to 2.06 million, but people in work also rose 220,000 to 66.92 million, the ministry said.

By sector, accommodation and restaurant services, hit hard by the pandemic, logged the first year-on-year gain in the number of workers in 18 months, up 130,000 from the previous year to 3.82 million.

The wholesale and retail fields saw an increase of 490,000 from a year ago to 10.71 million, adding the largest number of jobs among others.

The number of people laid off declined 10,000 to 600,000, down for the first time in 17 months, which a ministry official said could be regarded as a "turning point in trends," along with the increase of employees at hotels and eateries.

Compared with a pre-pandemic figure, however, the official told reporters that the number of people on payrolls was still at a low level, saying that it was 550,000 lower than the 67.47 million in June 2019.

Takuya Hoshino, a senior economist at the Dai-ichi Life Research Institute, said the number of workers has been falling on a seasonally adjusted basis since the beginning of this year as the government repeatedly issued virus emergencies, but the downward trend is "coming to a halt."

Hoshino pointed out that more dining establishments are increasingly defying the government's requests amid repeated virus emergencies and that the increase in the number of people employed by hotels and eateries may be an indication of this.

"The situation over the spread of virus infections is getting worse for sure, and the employment environment in the accommodation and food service industries could worsen again," he said.