A cultural exchange organization under the South Korean Foreign Ministry gave an award Friday to Hiroshi Nakao, a Japanese researcher of Korean envoys to Japan between the 17th and 19th century, for his contribution to promoting civil exchanges between the two countries.

Nakao, an 85-year-old visiting professor at Kyoto University of the Arts, became the first Japanese to receive the biannual award of the Korea Foundation since it was established in 2008, with ties between South Korea and Japan currently soured over a host of bilateral issues.

The award is given to individuals and organizations who promote awareness and a better understanding of South Korea in the global community, according to the foundation. 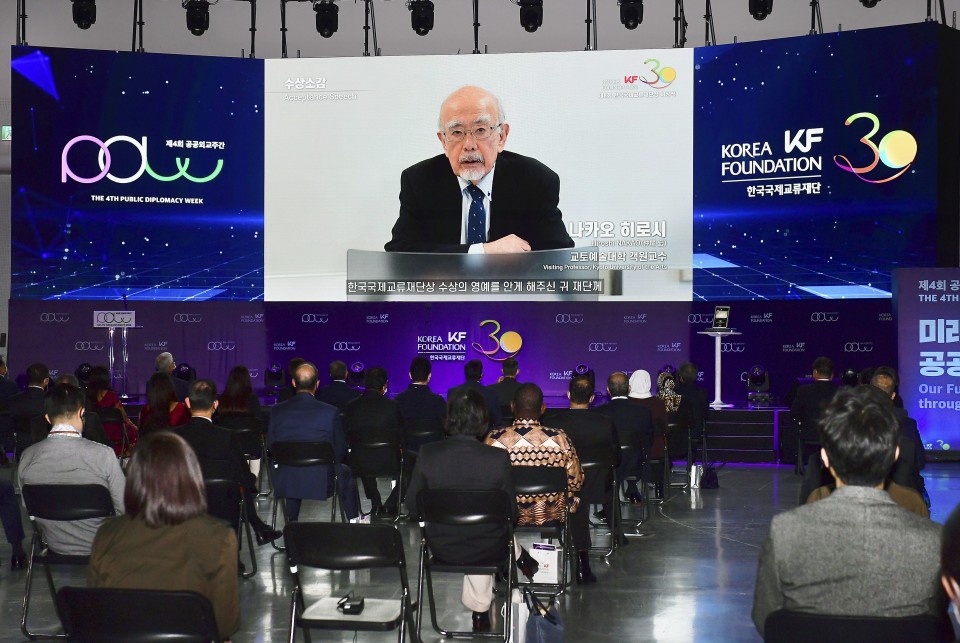 Hiroshi Nakao, a Japanese researcher of Korean envoys to Japan between the 17th and 19th century, speaks in a pre-recorded video message at an award ceremony in Seoul on Oct. 29, 2021. Nakao was given an award for his contribution to promoting civil exchanges between the two countries by a cultural exchange organization under the South Korean Foreign Ministry. (Kyodo)

"Through 40 years of research on the history of Korea-Japan exchange, Professor Nakao has contributed significantly to the enhanced understanding of Korea by Japanese citizens and the broadening of civic exchanges between Korea and Japan," the foundation said in a statement.

Nakao's accomplishments include spearheading bilateral projects to preserve and research historical documents on Korean envoys to Japan, called Tongsinsa, and other activities to improve ties between the two countries.

The documents of the diplomatic missions sent by the Korean Chosun Dynasty (1392-1910) to Japan between 1607 and 1811 were added to UNESCO's Memory of the World Register in 2017. Nakao contributed to the registration as head of the committee of Japanese researchers working for the inclusion of the documents.

"(Korea and Japan) have had exchanges since the prehistoric era, which resulted in the establishment of great cultures in each country," Nakao said in a pre-recorded message that was played at the award ceremony.

He also said he would like to put further efforts into deepening friendship between the peoples of the two countries.

"At a civic level, there are so many people who wish to see an improvement in South Korea-Japan relations," Lee told Kyodo News after the award ceremony, referring to bilateral tensions mainly due to a dispute over wartime compensation.

"What is needed, I think, is exchange to achieve better understanding and trust in various fields," Lee said.